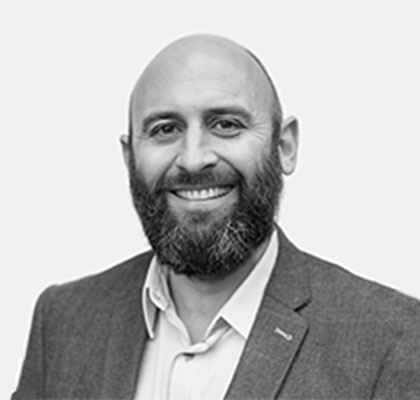 Dan Shelley acts as the Group’s Chief Infrastructure and Digital Transformation Officer. His role sees him taking the lead on all of the Group’s transformation programmes, delivering against the ambitious capital programme as well as our digital and physical estate. His role sees him bringing forward innovations that will enhance the operation of the Group, delivering clear impacts that help to support both the community and employers across the East Kent geography.

Dan joined the Group from East Sussex College Group (ESCG) where he was the Executive Director of Strategic Partnerships and Engagement. His role saw him leading the development of the group’s curriculum strategy, as well as leading a range of strategic relationships that ensured ESCG was at the forefront of developments within the communities it served. Amongst this agenda Dan led projects that secured more than £4.5m of funding for 2021-2022 from a range of sources that included the ESF, Town Deal Fund, Strategic Development Fund and the Community Renewal Fund.

Dan also acted as the senior officer leading relationships with a wide range of employer and community bodies, such as the Local Enterprise Partnership, Skills East Sussex (on which he chaired two of its employer sub-groups), the Hastings & Rother Economic taskforce, Hastings & Newhaven Town Team Boards and the South East LEP Skills Advisory Board.

Prior to this Dan worked in a range of senior roles in FE and skills organisations across the Sussex area, developing a broad range of specialist skills that include (but are not limited to), marketing and PR, Management Information, Higher Education, student voice, funding bids and leading a variety of national and international projects.

Dan’s appointment at EKC Group sees him return to familiar ground, as he is a former student of Canterbury College’s, where he studied for three A Levels in 1992, before returning to his hometown and progressing to the University of Derby to take a degree in Social Sciences, where he maintained his love of the might Rams, Derby County.

Although a passionate champion for East Kent, he lives in East Sussex with his partner, Kirsten and 16-year-old son, and enjoys spending time with his other son who has now flown the nest, studying at University in Bristol. A regular runner, he’s taken on four marathons, and aspires to tackle the six international city marathons before his retirement. In his spare time Dan has a number of voluntary roles, which include acting as a Non-Executive Director of Sussex Chamber of Commerce and Chair of the Sussex Local Skills Improvement Plan (LSIP) Board and a trustee of the Rye Partnership, a local regeneration partnership.

If you are applying, you may need to register with our Enterprise platform. Enterprise will manage your personal information, applications and interview dates with us and give you control to choose what to apply for, your interview dates and to accept your offers.

You will be applying to join a pathway. Pathways are a set of courses that you can progress on to during your time with us.

You can use our Explore Your Future tool to find the right pathway based on your interests, skills or career aspirations. It will give you a range of options, based on where you live or where you want to study.

Alternatively, you can search the pathways at each of our Colleges to find out more.

You can apply to join us on a pathway page or, if you would like more information, you can read more detail about the courses in that pathway and then apply.

If you have not registered on the system, you will need to sign up and complete your details and accept our terms and conditions.

You will be sent an email to the address you provided. Click on the link within the email to verify and activate your account.

Once you have clicked on the link, you will be redirected to Enterprise. You will need to sign in to continue your application, completing your personal information, previous studies and your skills and interests. This information will be used at your interview and will help us to find out more about you.

There will be a number of dates available to have your interview with us – select the best for you. You will then receive an email confirming your interview date as well as a thank you email.

Remember: If you cannot attend your interview, you will need to contact your College to rearrange.

Getting ready for your interview

You will receive an email confirming your interview date. Please add this to your calendar. Some pathways require you to complete a project or bring examples of work with you. Please check before you attend.