Taking things one stitch at a time

The Covid 19 pandemic has caused a lot of crazy things to happen. But if someone had told me a year ago I’d be working from home and sewing scrubs for the NHS, I would not have taken them seriously. Yet, here I am.

The college has been supporting staff to take on community action projects throughout lockdown and had pledged to support the East Kent Hospitals University NHS Foundation Trust in the production of hospital scrubs. They would fund the materials needed and promote the opportunity to staff.

So firstly, I feel the need, to be frank with you. I am in no way a seamstress or an expert of any kind when it comes to sewing. I own a sewing machine and dabble in creating little items, such as pillowcases. I have never made an item of clothing and the very thought of doing so filled me with dread. I was convinced it must be really complicated, yet I wanted to try. The need was real, places were crying out for PPE and I figured I should give it a go. I mean how hard could it be right?

I decided before donning my scissors and attacking the fabric, I should probably do a little research to put me on the right footing. YouTube had some great how-to guides, one of which followed the exact same ‘Sew Different’ pattern I’d been provided with. Bonus! The video came in two instalments, one for the scrubs top and another for the bottoms. I watched both videos right though, taking it all in. Following this, I felt more confident and decided to get started.

Step one: Cutting out the pattern

Taking a tip from the YouTube video, I sent off for the pattern, having it printed on A0 paper. This made cutting the pattern out much easier. I wasn’t having to match up the pattern sections and stick a thousand sheets of paper together. I simply laid out the A0 sheet on the table and followed the line which indicated the size scrubs I was going to make. I’d opted to make the medium size, so I, therefore, needed to follow the dashed line. 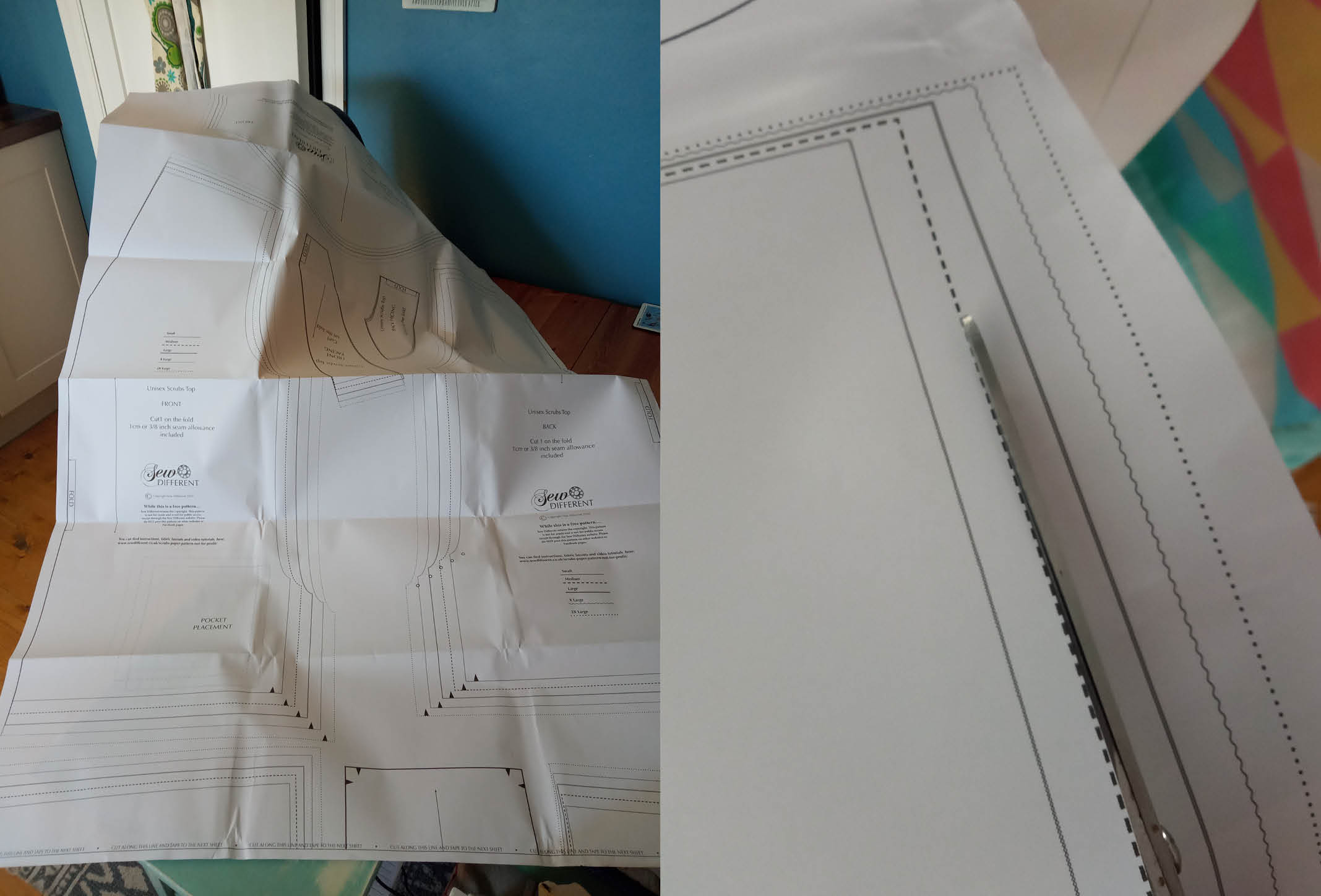 I encountered confusion almost immediately. Areas of the pattern were label ‘fold’. I had no idea what this meant, was I supposed to cut it or fold it? I opted for cutting, which thankfully proved to be the right decision. This all made sense once I laid the cut pattern out on the table and reviewed from a distance. Seeing that I only had half a top cut out, I understood ‘fold’ meant to fold the material before cutting around the pattern, so when the material is then unfolded, you’d have a whole top, not half. Hopefully, the image will help you understand my baffling explanation! 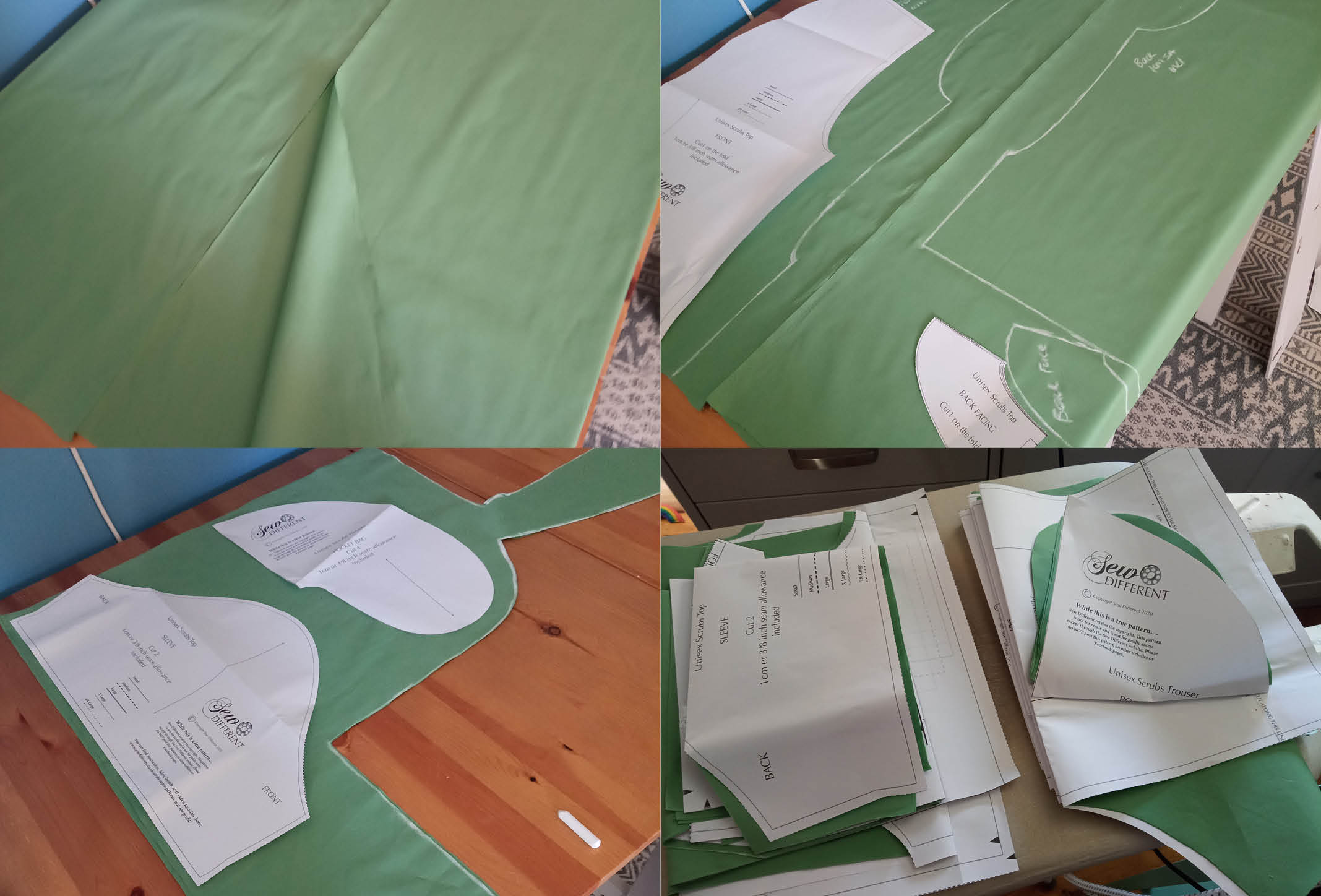 Relieved I’d successfully navigated the pattern I spent the next hour or so cutting all the different parts out ready to sew together. By the time I had finished, my back was aching and I felt mentally whipped out and in no frame of mind to attempt actual sewing.

Starting afresh the next day, I set up the laptop with the YouTube videos I’d found, figuring I’d watch and sew along as each step was explained. This worked really well, as I was able to pause and re-watch techniques over and over until I grasped the concept.

I started with the top, the first step was to sew the v-neck. The first part was pretty simple, sew the two facing pieces together at the shoulder and the same for the two top sections. Next, I had to sew the facing onto the top. Not so easy. I am also my own worst enemy at times, preferring to persist with something, when often I should have relented sooner and started again. This was the case here. The v-neck point did not sit right. I tried to make it work but eventually, I ended up having to unpick to the whole section and resew it. 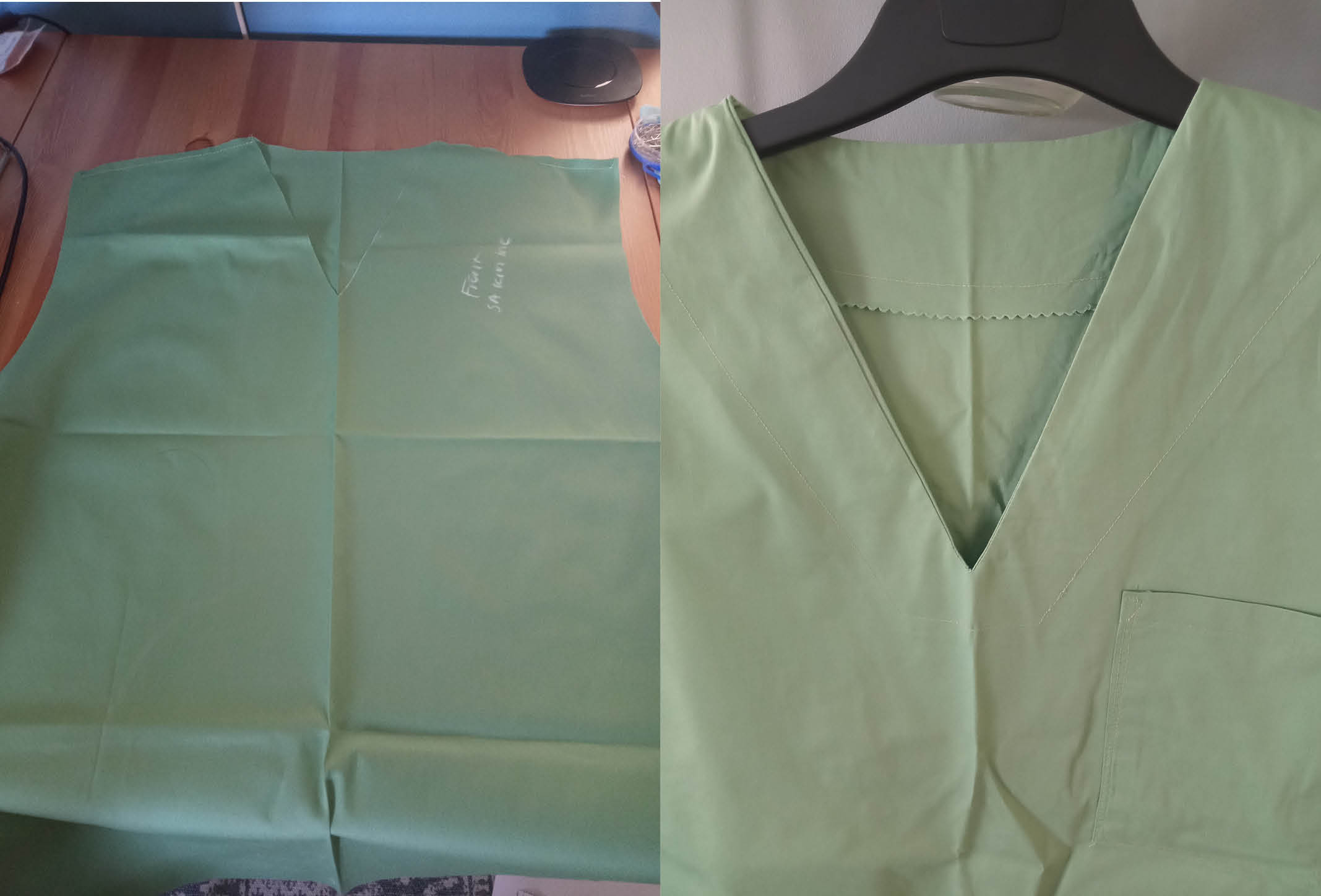 Finally satisfied with the v-neck, the next step was to sew on the front pockets. Being as these are sewed straight onto the top, this wasn’t too hard to do. The main thing was lining up the pockets so they were level. 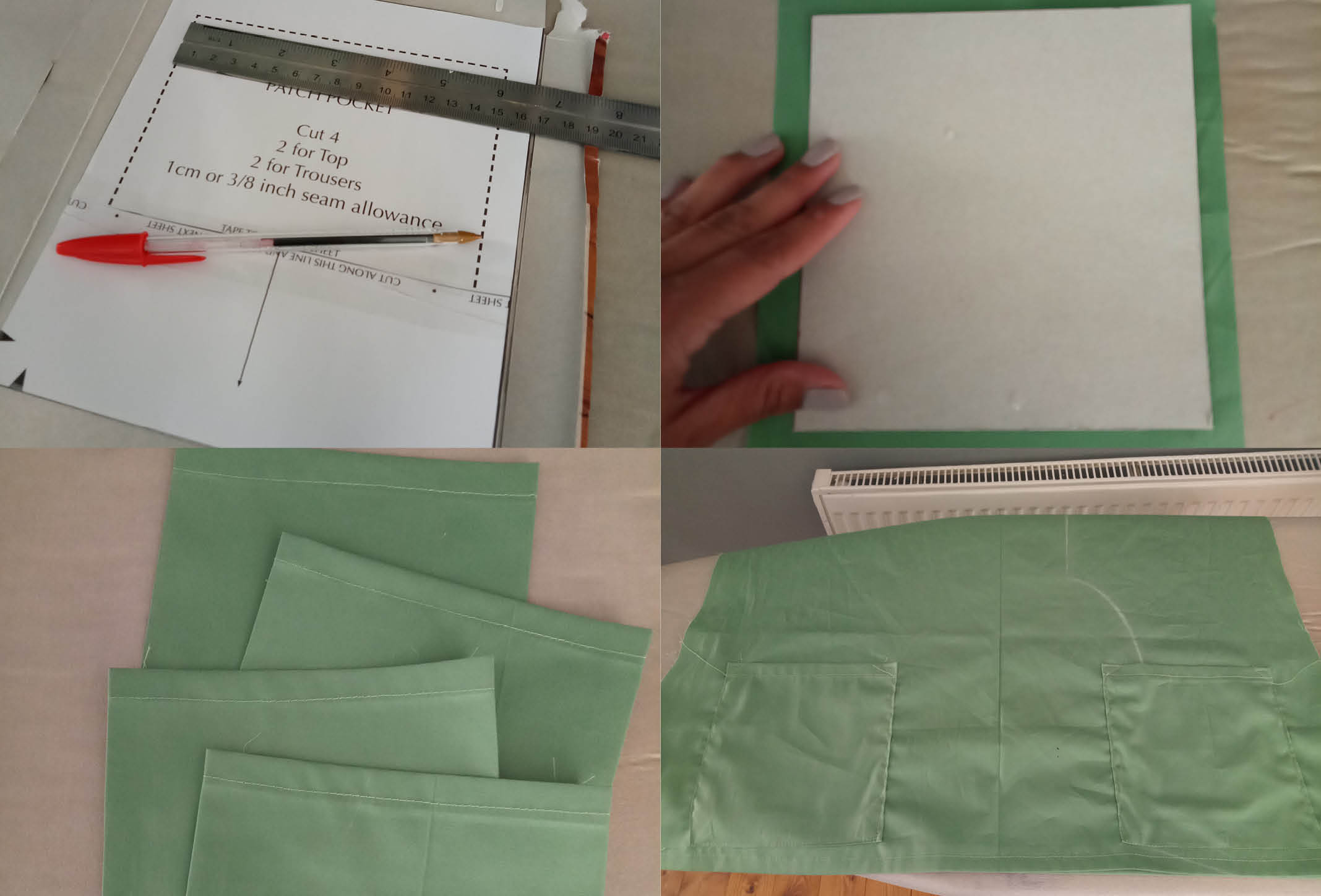 The sleeves were next. Although this looked far harder in the video, they actually sewed on okay. It’s a wonder how the pieces all came together, with every step I could see a recognisable scrub top develop. After this, the rest of the top was pretty simple, just sew all the edges together and hem the bottom and the sleeves.

And there we have it, a completed scrub top. 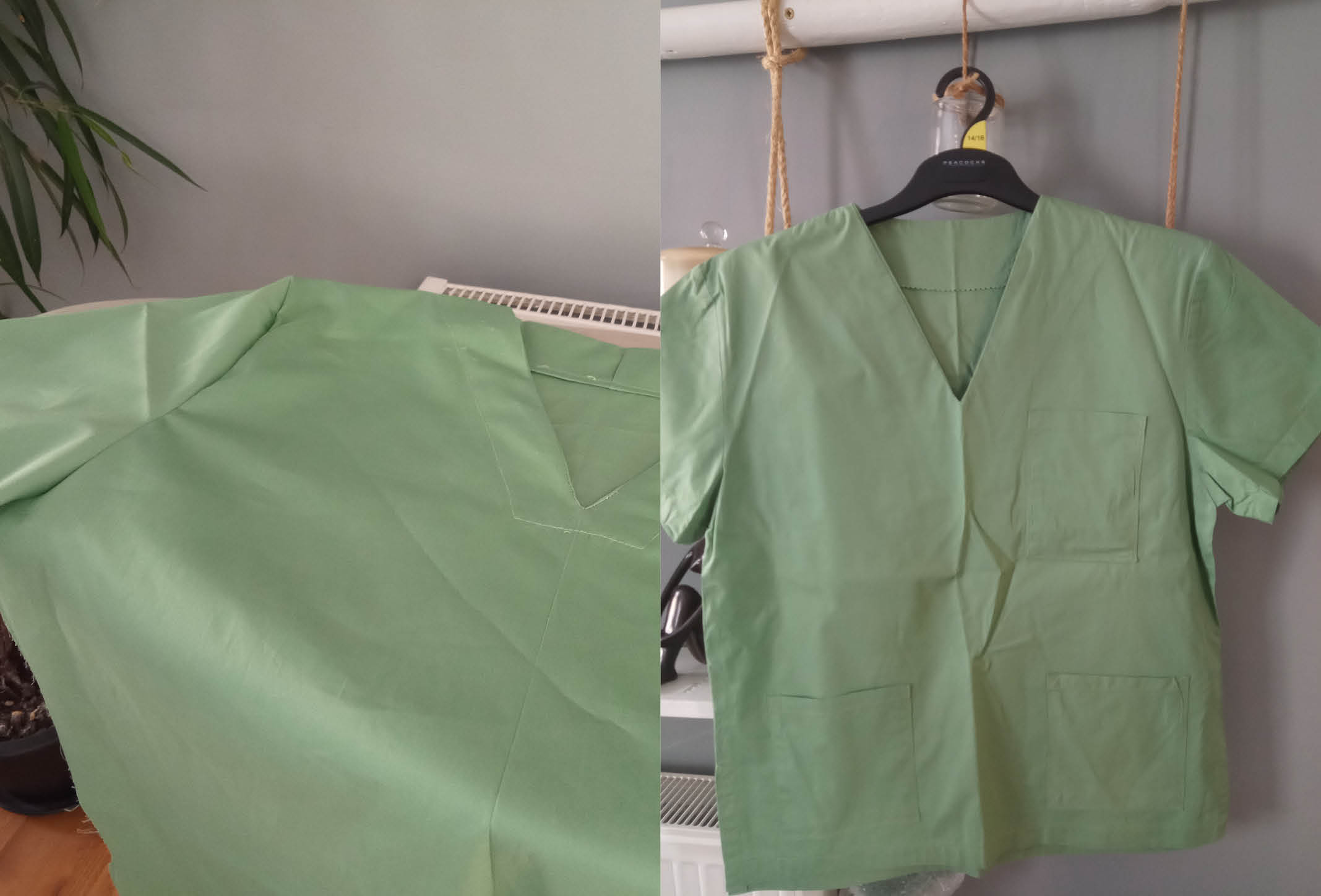 Again following along with the YouTube video, which was essential at this stage, I was able to pair up the correct pattern pieces for sewing. To start, the back pockets were stitched on and the pocket sacks needed positioning and stitching into place. Sounds simple, but you have to remember, these sacks are going to be stuffed inside the trousers, so the seam would need to be on the underside. This took me some attempts as I kept sewing the pocket sack to the wrong side of the trouser leg, meaning my seam could be seen from the outside. This was first discovered once I’d stitched the whole trouser leg together, which was very frustrating. 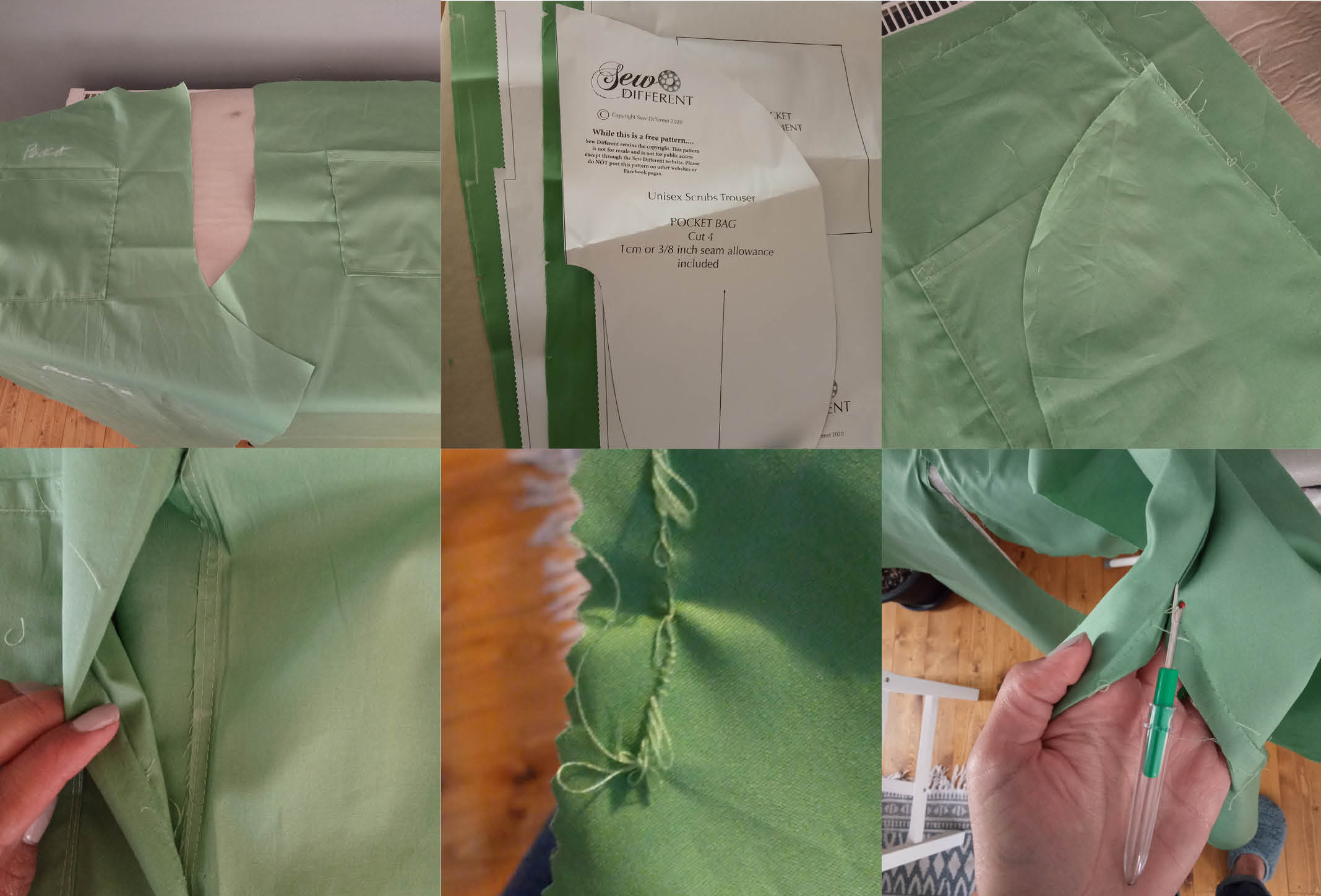 Once I mastered this, the rest of the trousers came together nicely. Starting by stitching down the outside legs, encompassing the pocket sack and then stitching from the crotch, down the inside seam. So now I had two trouser legs, they just weren’t joined together.

Back to the YouTube video, an excellent technique for joining the trouser legs together was demonstrated. Following along and crossing my fingers I’d understood the instructions, I stitched from the crotch up to the waistband on both sides. Turning the trousers back the right side out, it was as if a miracle had occurred, I finally had trousers! All that was left to do was hem the bottoms and waistband.

For the band I used a 5mm cord (approximately) which seemed to do the trick, acting as a drawstring. Once this was in, I was done. I now had a whole set of scrubs ready to go and a very smug face. I have now made a total of 3.5 scrub sets, with more to come. Each time I get faster and no longer need to watch the YouTube videos for guidance.

It’s very rewarding to be able to put your skills to use. Not only have I learned a lot creating the scrubs but my sense of purpose has been boosted along the way. It’s amazing to think sometime in the near future someone will be wearing the scrubs I made. I wonder what they will think of them.

If you are applying, you may need to register with our Enterprise platform. Enterprise will manage your personal information, applications and interview dates with us and give you control to choose what to apply for, your interview dates and to accept your offers.

You will be applying to join a pathway. Pathways are a set of courses that you can progress on to during your time with us.

You can use our Explore Your Future tool to find the right pathway based on your interests, skills or career aspirations. It will give you a range of options, based on where you live or where you want to study.

Alternatively, you can search the pathways at each of our Colleges to find out more.

You can apply to join us on a pathway page or, if you would like more information, you can read more detail about the courses in that pathway and then apply.

If you have not registered on the system, you will need to sign up and complete your details and accept our terms and conditions.

You will be sent an email to the address you provided. Click on the link within the email to verify and activate your account.

Once you have clicked on the link, you will be redirected to Enterprise. You will need to sign in to continue your application, completing your personal information, previous studies and your skills and interests. This information will be used at your interview and will help us to find out more about you.

There will be a number of dates available to have your interview with us – select the best for you. You will then receive an email confirming your interview date as well as a thank you email.

Remember: If you cannot attend your interview, you will need to contact your College to rearrange.

Getting ready for your interview

You will receive an email confirming your interview date. Please add this to your calendar. Some pathways require you to complete a project or bring examples of work with you. Please check before you attend.